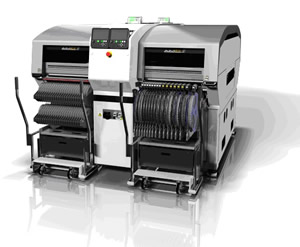 The all-in-one placement machine AIMEX II has been developed. The AIMEX II inherits concepts from the popular AIMEX, but with increased flexibility and expandability.

The remarkable progress of electronics and next generation communications infrastructure is based on electronic circuit boards. These boards are manufactured using surface mount technology, at the center of which are electronic assembly machines (mounters). Transitions in the market mean that there are growing calls for factories to perform high-mix low-volume production and variable-mix variable-volume production.
The AIMEX II is a machine that can answer these demands.

Can load a huge quantity of parts

In order to support the large volume of part types required for high-mix production, up to 180 different part types in tape can be set on the machine. In addition, the supply units can be easily changed, with a wide variety of units available to supply parts from trays and sticks in addition to tape.

The head types as well as the number of robots can be selected to match changes in the type and scale of production. (Up to 4 robots per machine)

Auto Shape Generator at the machine is now offered as standard to reduce the time required to ramp up production from introducing a panel type during high-mix low-volume production. When using the NPI support function and a vision processing error occurs at the machine, fast continuation of production is possible because vision processing data is automatically recreated based on the actual acquired image. This reduces the production startup work when products are changed.
*NPI tools: New Product Introduction tools

This machine can perform dual lane independent production of different panels at the same time by using double conveyors. With this setup, while one lane is producing, changeover can be performed at the other lane. This means that the equivalent of two lines can be operated while only using a single line of machines.

The AIMEX II supports small panels from 48 x 48 mm (1.89″ x 1.89″) to very large panels up to 759 x 686 mm (29.88″ x 27″). This allows it to efficiently produce a wide range of panels, from small ones such as those used in mobile phones and digital cameras to medium size panels such as those needed for network boards and notebook computers, as well as long LED panels and LCD-TV panels.

A multi feeder unit that can be used to exchange feeders as a group is used as the feeder supply unit. When the offline power supply unit (option) is used, feeders can be setup on the MFU offline and all of the feeders on the unit can be rewound automatically with the touch of a button. This makes external changeover work more efficient and faster.

Tray units can be set at both sides of the machine

Tray units used to supply parts in trays can be loaded at the front or back side of machines. Non-stop tray part supply is possible using the independent magazine configuration from Fuji. This makes it possible to reduce the amount of time the machine is stopped when tray parts run out during production.

Parts up to 38.1 mm (1.5 inch) in height can be handled on the AIMEX II with the odd-form part OF head. This allows the machine to place tall parts up to 38.1 mm in height such as large scale relays and LAN connectors that are commonly used for automotive panels and motherboards just by changing the parts supply unit.

Selecting to use V-Advance (feeder pallet shifted forward) while using V12 heads leads to shorter distances between the pickup and placement positions and improved throughput.

AIMEX II heads and many exchangeable units (device related, part supply units, camera units, and optional units) are shared with the NXT-series. The AIMEX II inherits the flexibility of the NXT-series and, just like with NXT machines, can be flexibly configured to match the production conditions. 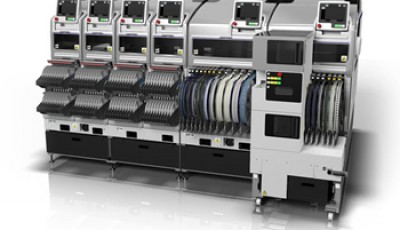 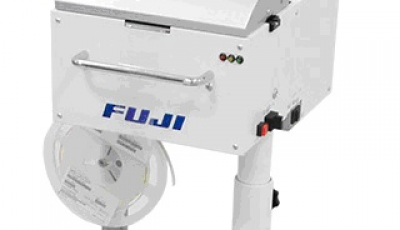 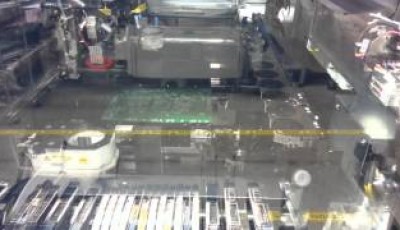 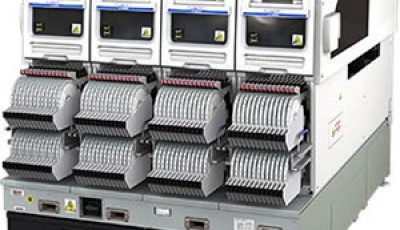