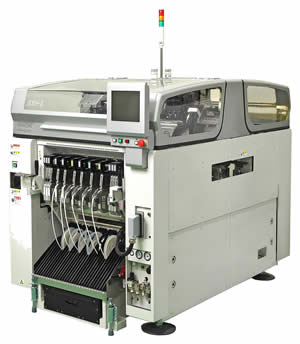 The SIGMA G5JS implements HITACHI’s “Overdrive technology” for full utilization of both front and rear resources via a single placement head.

Electronics manufacturers and PCB assemblers who want the precision and accuracy of HITACHI’s SIGMA Series Modular Mounters, but don’t need all that capacity just yet, can get started with the new SIGMA G5JS, a single beam version of the recently introduced SIGMA G5S, according to Tom Simpson of Hitachi High‐Tech Instruments.

The SIGMA G5JS implements HITACHI’s “Overdrive technology” for full utilization of both front and rear resources via a single placement head. The head can be either high-speed (up to 44mm square single shot recognition) or the multifunction head, which is capable of a variety of both SMT and through-hole components. “The customer can use this basically as an SMT platform, including 3 different tray feeders to choose from; or they can configure it as a work cell via the Multifunction head, Stack stick feeders, or radial and axial lead feeders,” Simpson says.

“The new SIGMA G5JS gives our customers the option to get into Hitachi technology at a reduced price, while at the same time being compatible in terms of feeders, nozzles, feeder carts, programing, and just about everything else, with our high speed versions,” Simpson stated. “Starting out with the G5JS, they can seamlessly scale up their production by integrating our high speed equipment into their production line.” The high-speed head is rated at 37,500 CPH and the multi-function head 7,000 – 9,000 CPH for chip components, excluding PCB transition time of approximately 2 seconds. 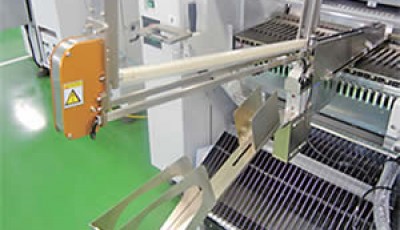